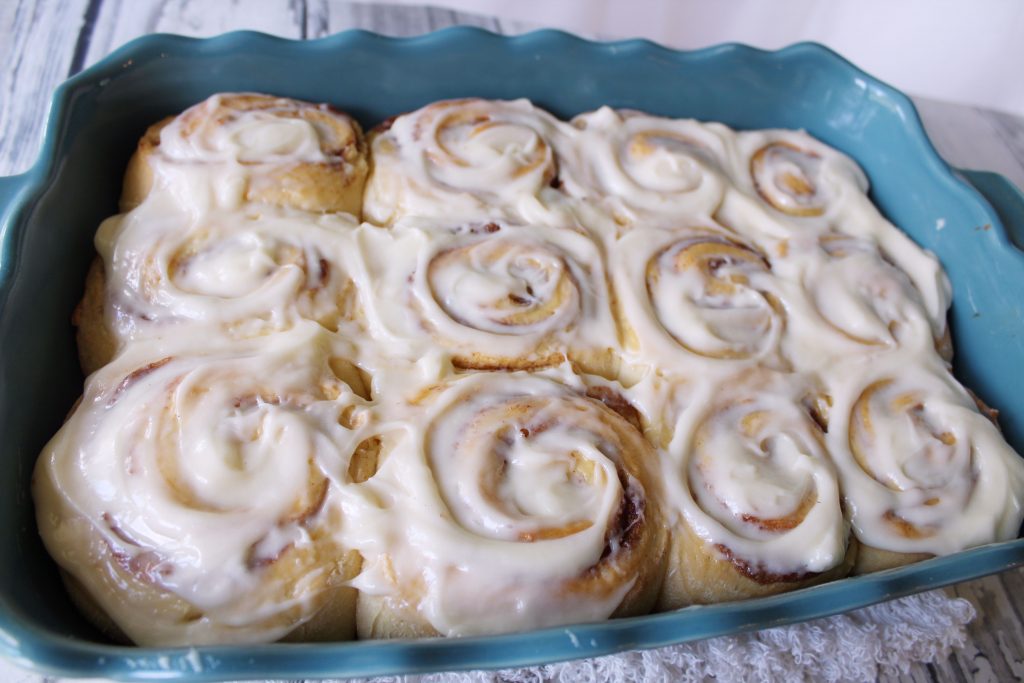 These Cake Mix Cinnamon Rolls come from my collection of “furlough rolls”. My husband is a federal employee and he was furloughed during the fall of 2014. To help make ends meet during that time I made and sold cinnamon rolls when I got off work. I came up with several variations of cinnamon rolls in that time and I dubbed them all furlough rolls. When that time passed and my husband was no longer furloughed I swore I would never knead dough again. Once the blisters healed from closing hundreds of pans and the freezer no longer was stocked with pans of rolls that didn’t sell I missed them. These are seriously worth kneading dough again. Back in 2014 I adjusted this recipe many times and could make these without even thinking but not today. I actually had to pull out my handwritten notes. 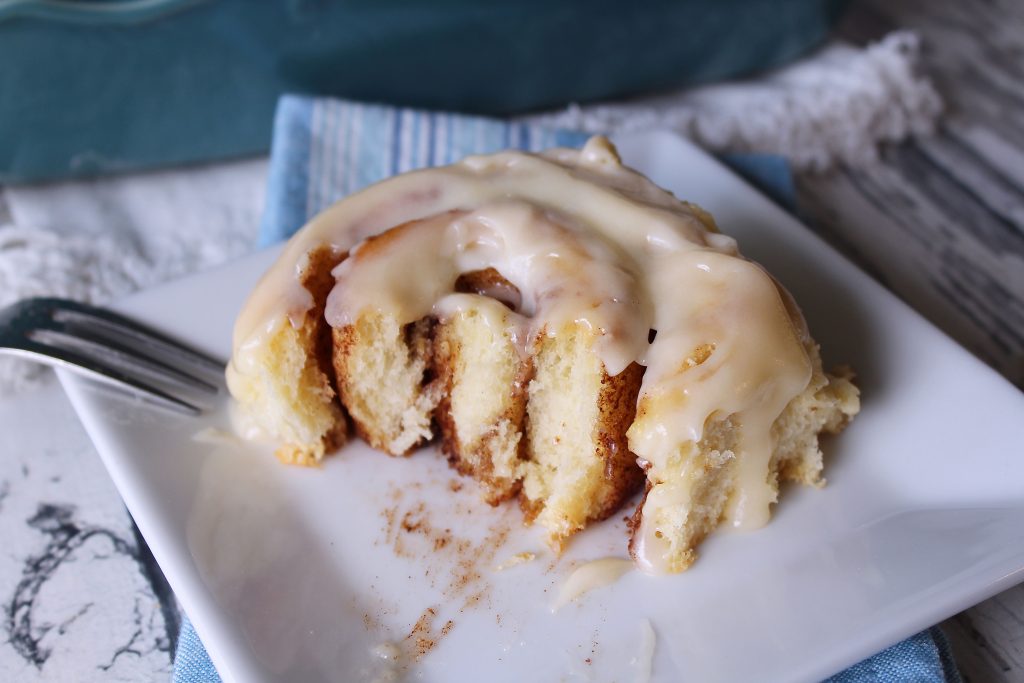 This recipe makes a lot of cinnamon rolls, so if you aren’t cooking for a small army these are great to par-bake and save for later. Today I baked and half and put the rest in the freezer for later( check out How to Par-Bake Cinnamon Rolls). While we are talking about baking lets talk about cinnamon. Back when I was making these I discovered siagon cinnamon and boy it really makes a difference. I am telling you one taste of this cinnamon in these rolls you will never want anything else again.  The smell alone brought my teenage boys out of their summer hibernation and off the PS4 /Fortnite to come investigate what I was baking. 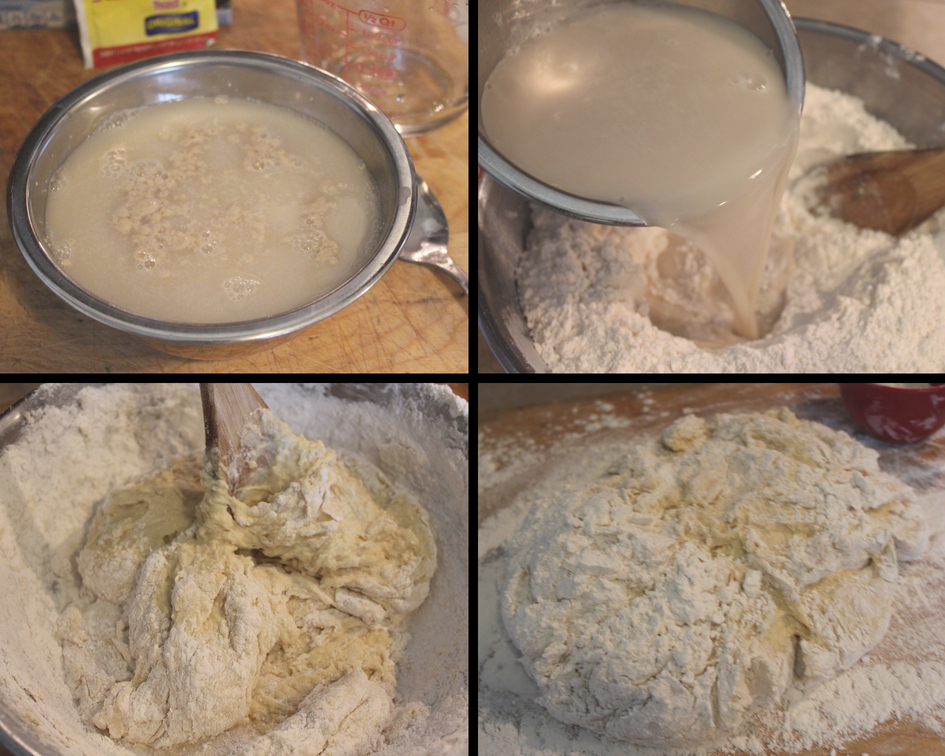 I know there are so many methods of making cinnamon rolls but I do it the old fashioned way. This all seems like a lot but seriously it’s not that hard. First start by proofing your yeast. Do that by placing two packets of yeast in a bowl and pour warm water over it. The temperature of the water needs to be at least 95 degrees but no hotter than 110 degrees, use a kitchen thermometer . While the yeast is proofing mix the cake mix, sugar , and flour in a bowl. Make a well in the center, when the yeast is done proofing pour the yeast mixture in the center. Mix the dough with a wooden spoon , adding more flour if needed . Turn the dough out onto a floured surface and knead until it is smooth and elastic like. Add more flour if the dough is too sticky. 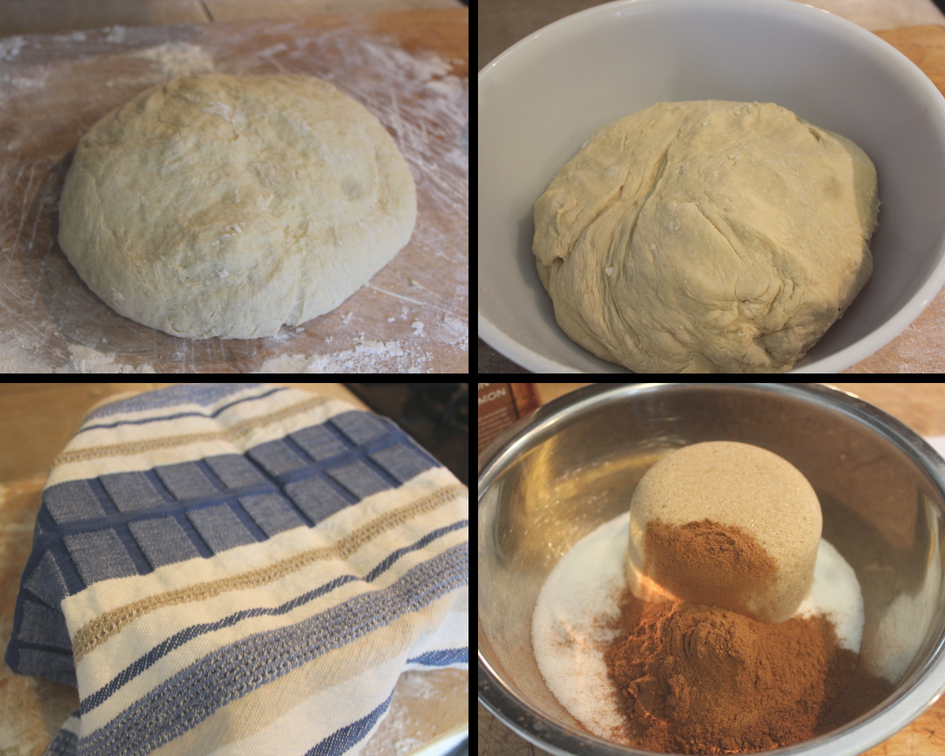 Once the dough is smooth and elastic like form into a ball and place in a well oiled bowl. Cover with a towel place in a warm non drafty area. The dough should rise and double in size , it usually takes about an hour. While the dough is rising mix the cinnamon sugar filling and set aside. 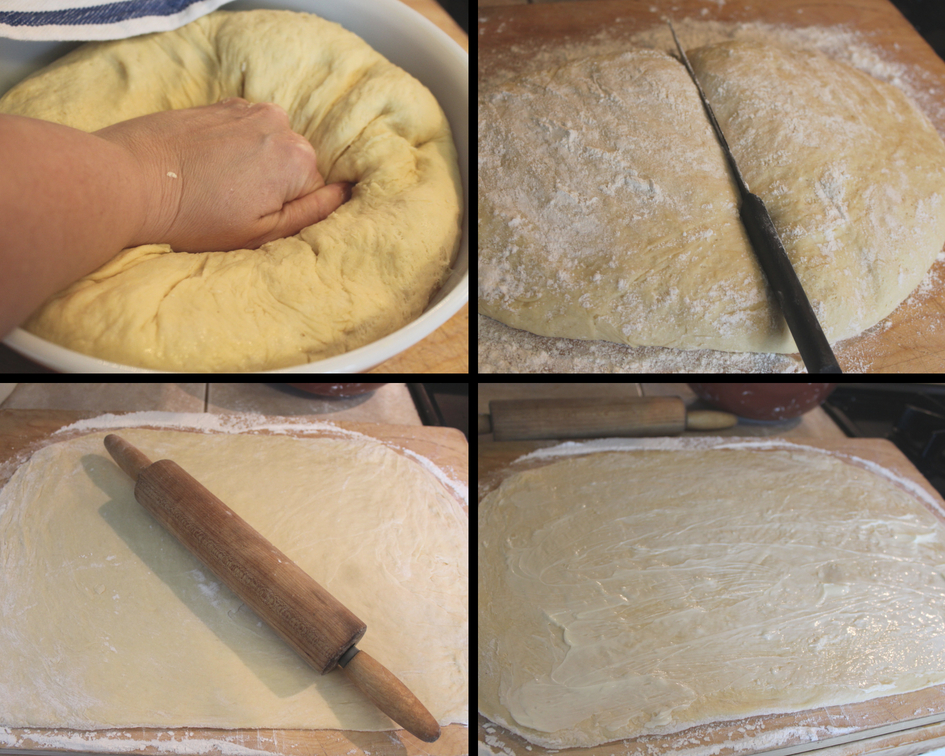 Once the dough has doubled in size punch down then turn onto a floured surface. Cut the dough in half and set one half aside. Roll the half of the dough in a rectangle shape and spread 4 tablespoons of room temperature butter on it. Don’t spread the butter all the way to the edges, leave about a 1/2 inch on the way around. Sprinkle 3/4 cup of the cinnamon sugar mixture on top of the butter. Start rolling the dough like a jelly Roll starting with the long end. Slice the rolls with a sharp flour coated knife and place the rolls in an a pan sprayed with cooking spray. 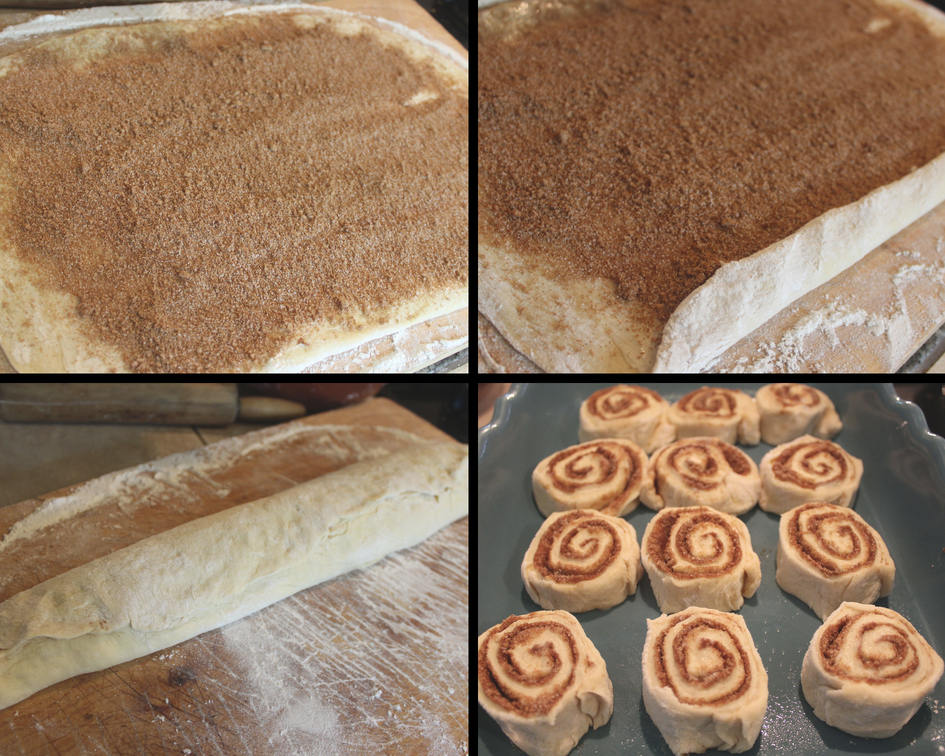 Cover the pan with a towel and allow the rolls to double in size . This usually takes about 30 minutes. Preheat the oven while the rolls are rising. Repeat the process  with the other dough. Once dough is done bake in a preheated oven for 20-25 minutes or until slightly browned. While the rolls are baking mix all the ingredients for the Cream Cheese Frosting for cinnamon rolls. Let rolls cool for about 10 mins  then spread the frosting. 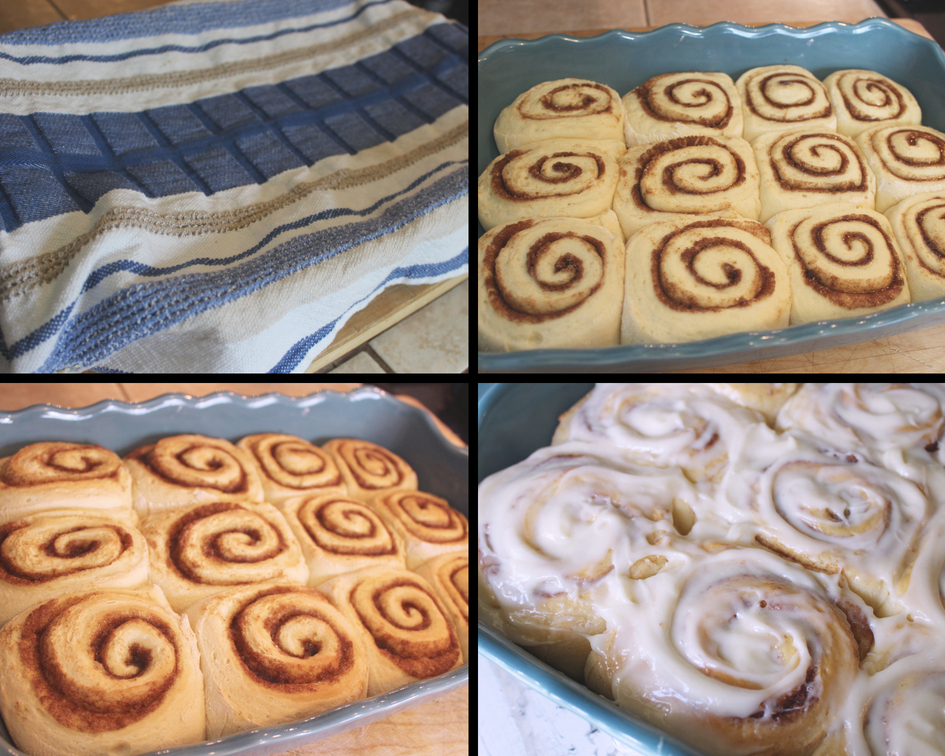 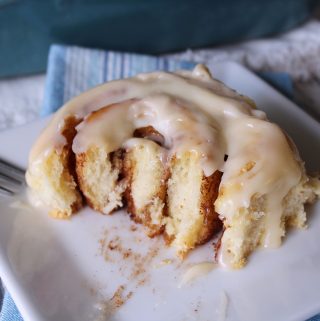 You will have 2 large rolls to cut. If you are baking them in a 9x13 pan I recommend cutting 12 from each roll ..totaling 24 roll.

Serving: 1g
Tried this recipe?Let us know how it was!

Hi Debbie! This recipe looks great! I want to try the par-baking method but I’m not seeing how many rolls this makes it how many of the 9 inch pans I would need! Help!

Thanks for asking and that’s a great question. I have baked a ton of these and the amount of rolls doesn’t really effect the par-baking . I have made them in a 9×13 pan with 12 with the same method. With that being said I like baking them in the round aluminum pans and usually 6-7 will fit depending on the size of the rolls. I hope that helped. If you are making the cake mix cinnamon rolls depending on how you cut them you should be able to 5 round pans so that would be around 35 rolls since I cut the a bit smaller in the smaller pans.

These are great step by step directions for making foolproof cinnamon rolls. Having pictures also really helps when making something more tedious like cinnamon rolls.

These cinnamon rolls look absolutely amazing, wow! I love the idea of using a box of cake mix too. I can tell this is one that the family will love!

I have been saying for so long that I will be making cinnamon rolls but didn’t yet managed to get there. This recipe looks just perfect. Saved!

This is an easy recipe to try Romona , Not a lot of guessing .

I love that you added that backstory about selling cinnamon rolls. It’s great that you did it, but I see it can ruin the pleasure of working with dough. I’ve never made it with cake mix, that is a clever idea. I love baking cinnamon rolls, nothing smells better!

HAHA..Yes I made thousands of connamon rolls during that furlough.

I didn’t know we can have a cake mix cinnamon roll, so nice to know and read about it. I will be trying this recipe and hoping it turns out well like this.

I had no idea you could make cinnamon rolls with a base of cake mix – thats brilliant! I also really appreciate all of your great steps listing out how to make these. It makes it so much easier to replicate!

Thanks for your kind words Jenni.

Oh my yum! I love this idea. I’ve been looking for recipes that use box cake mix. Pinning!

This is defiantly a new way to use a cake mix for the cinnamon rolls and can’t wait to give it a try.

Those cinnamon rolls look fantastic. I’ve actually never made cinnamon rolls even though I love them. Guess I’m not much of a baker! However, with your great step by step instructions I think I can give them a go!

I love the idea of using cake mix for Cinnamon rolls. And that generous sprinkle of cinnamon and those rolls are making me drool. Let me grab some coffee.

I don’t think there is anything more satisfying than making cinnamon rolls from scratch. The smell when they’re cooking fills me with a sense of smug self satisfaction. I can’t wait to try your recipe out, they look amazing!!

I am so excited to see more from your “furlough rolls” collection. Such a great recipe and just what I have been looking for!

Incredible story and a wonderful recipe – I am really enjoying your post and I am sure I will enjoy these rolls when I make them!

This sounds great. Do you think it would work with gluten free flour and cake mix?

Carol I have never tried it, I am not familiar with baking with gluten free products. If you try it let me know the results. Thanks, Debbie

Did I miss something in the write-up about the cake mix? What is the purpose of using the cake mix? Not against it, but just curious! Sound fantastic!

Hi Jill..Thanks for a the question. Before I ever made these I would have never understood, these are almost full proof. You really have to do something totally wrong to mess them up. I have made a lot of cinnamon rolls and the recipes I use cake mix they are always fluffy , soft and tender. This is the perfect recipe for a beginner baker since they are pretty hard to mess up.

Thanks for replying so quickly, Debbie! I thought I missed some logical reason to use cake mix, because it did not seem that it really sped up the process or anything. I am game to try!!

You’re Welcome..I hope you enjoy them.

Can u tell me how i would change to make orange rolls? Thanks

I’m sorry Samantha I have never made Orange rolls before.

Thanks for this recipe, and I can’t wait to try it.
However, I’m a bit confused.
Are you saying this recipe will make 30-35 rolls using half of the dough?
So, altogether this recipe makes 60-70 rolls?
Won’t the dough that’s waiting to go in the oven as the first batch bakes, overproof?
I wonder if I can cut this recipe in half?
Thanks, I just want to be sure before I start, lol.

Hi Claire , I am sorry for the confusion. I average 12-13 per roll depending on how I cut them. I find 12 large rolls fit perfectly in a 9×13 pan . So this recipe yields approximately 24 cinnamon rolls , with maybe a few extra depending how you cut them. I am sorry about the typo , I corrected it in the recipe. I have never had an issue with proofing and I have made 100’s of these. If you don’t need that many cinnamon rolls at once I recommend checking out my recipe of how to Par-Bake these rolls, there is a link in the recipe. I have never cut this recipe in half so I am not sure how that would work. Thanks!!

Thank you so very much, for the quick response, Debbie.
I just discovered your Facebook page and have already saved some recipe’s.
I will be making these this weekend, and the next one will be the Chocolate Peppermint Cake Balls. 🙂

You’re Welcome Claire..Thanks for taking a look ,Those Chocolate Peppermint Cake Balls are amazing !! Great for the holidays.

I make my cinnamon roll dough in my bread machine, then roll, fill and cut for second rising and bake in the oven, Do you think I could do the same with this recipe?

I’ll be honest I know a lot of people love making bread maker but I never have tried it . If you do try please let us know.

These look scrumptious and I want to try your recipe. I really like your ideas and instructions for parbaking and also for freezing in 9″ pans. Do you use regular yeast or the fast rising yeast?

Thanks Pam .. they are delicious . I use regular yeast for this recipe.

I have honestly never used a lemon cake mix for this recipe . The only thing I would be worried about is the flavor of the cake mix will alter the end result if you want a classic cinnamon roll.

when to freeze and thaw?

Hi Pat If you Click HERE it will give a little more explanation of par baking. After the second rise bake them 1/2 the time , cover and freeze . They can be baked frozen or thawed.

[…] boxed mix is a great way to speed up the baking process. These cake mix cinnamon rolls from Baked, Broiled, and Basted use yellow cake mix as the base for a delicious breakfast […]

Just wondering if you can use a sugar substitute in making these cinnamon rolls. Thanks

I have never used a sugar substitute in these so I can’t give any advice on that. Just keep in mind the cake mix has sugar in it as well.