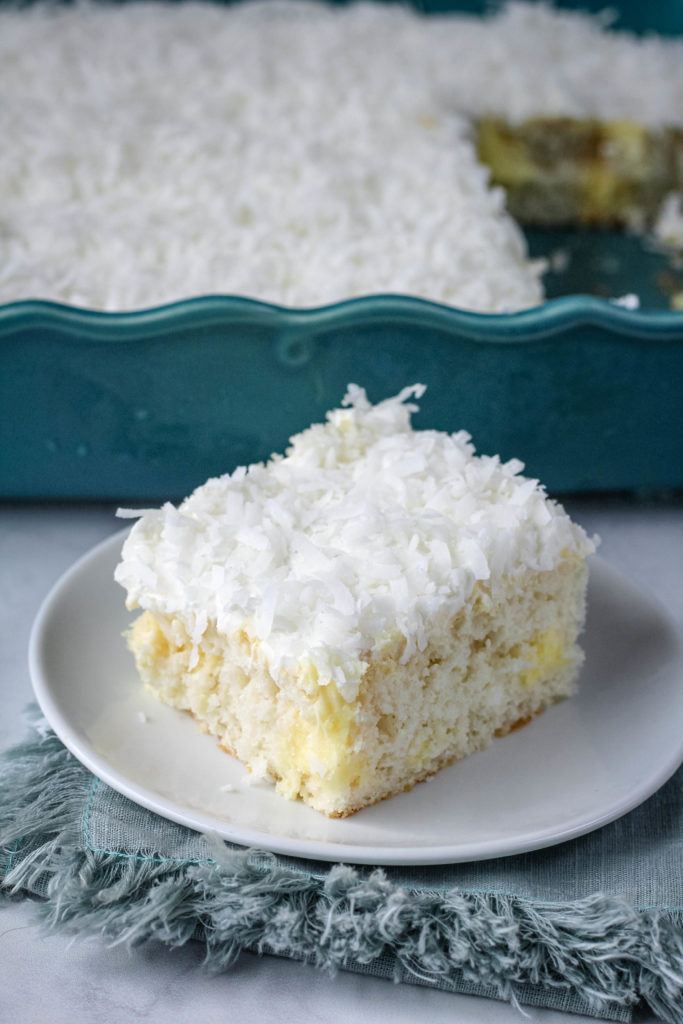 This cool and creamy Coconut Poke Cake starts with a simple white cake and then drenched with sweet coconut pudding. Topped off with a coconut flavored whipped  topping and flaked coconut. We love pudding poke cakes at my house and this one right here is no exception. I mean who doesn’t love a good coconut cake?  Growing up starting around Easter and into the summer months we always had some type of coconut dessert . There is just something tropical and yummy about it.  This is one of those simple cakes you pull out of the Ice Box and in warmer months and it is so refreshing. Trust me , it will be the first cake to disappear at a potluck.

What will you need to make a Coconut Poke Cake :

Suggested tools to make this cake: 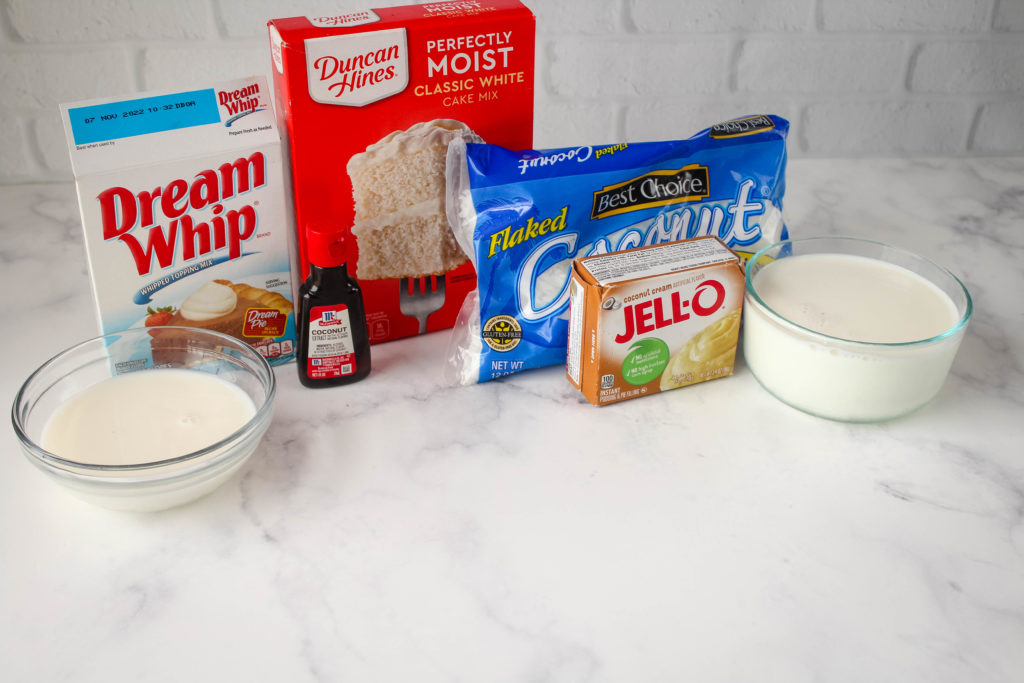 Mix the cake according to boxes directions and add two teaspoons of coconut extracts to it. This will give it a little bit of extra flavor. 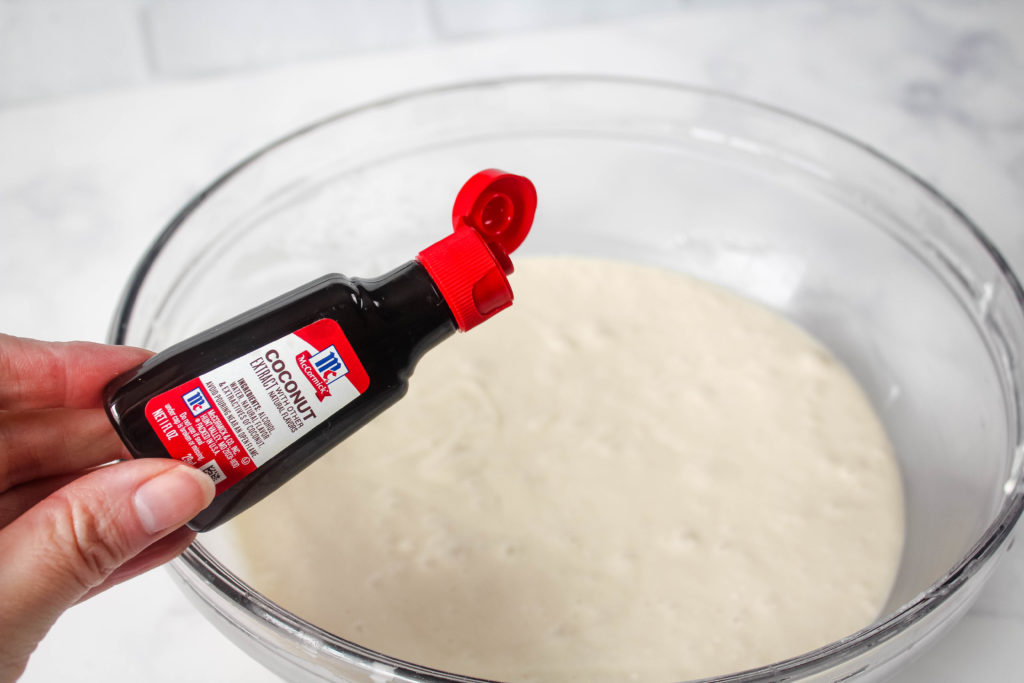 Once the cake is mix pour it in a 9×13 baking dish prepared with a baking spray.  Bake the cake according to the boxes directions. 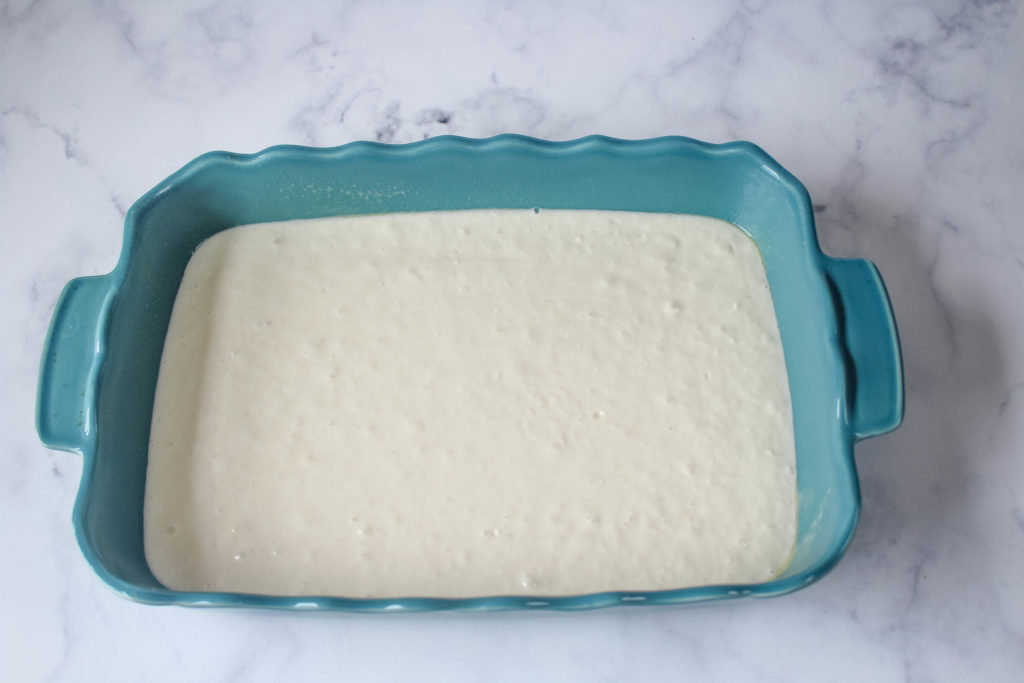 After the cake has cooled for about 30 minutes poke random holes all over using either a straw or end of a wooden spoon handle. 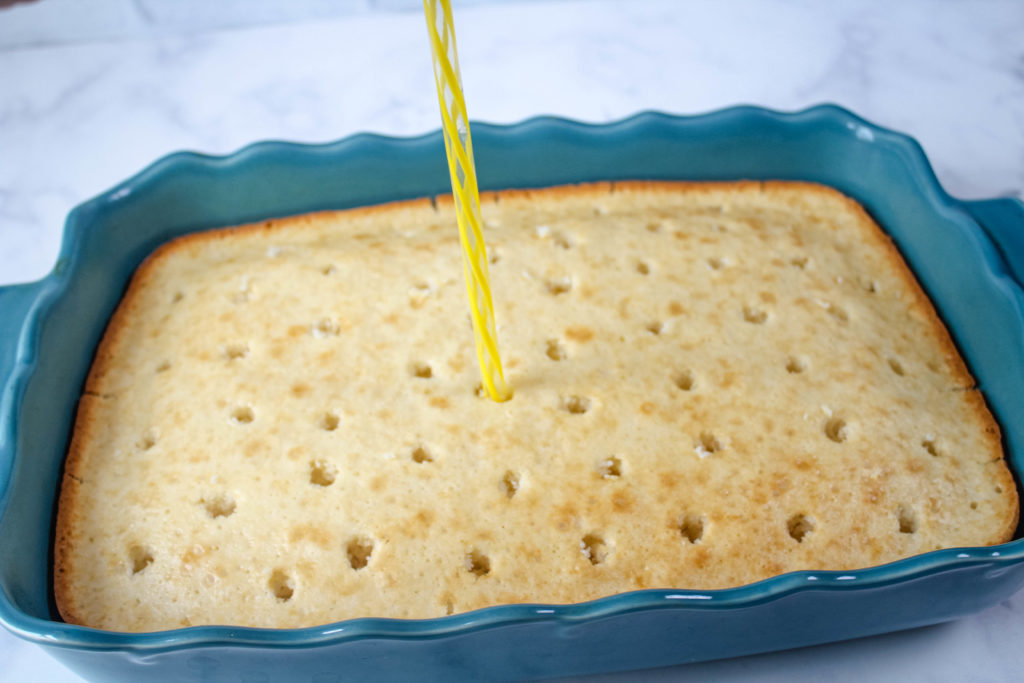 Once the cake is cooled mix the coconut pudding with two cups of milk. 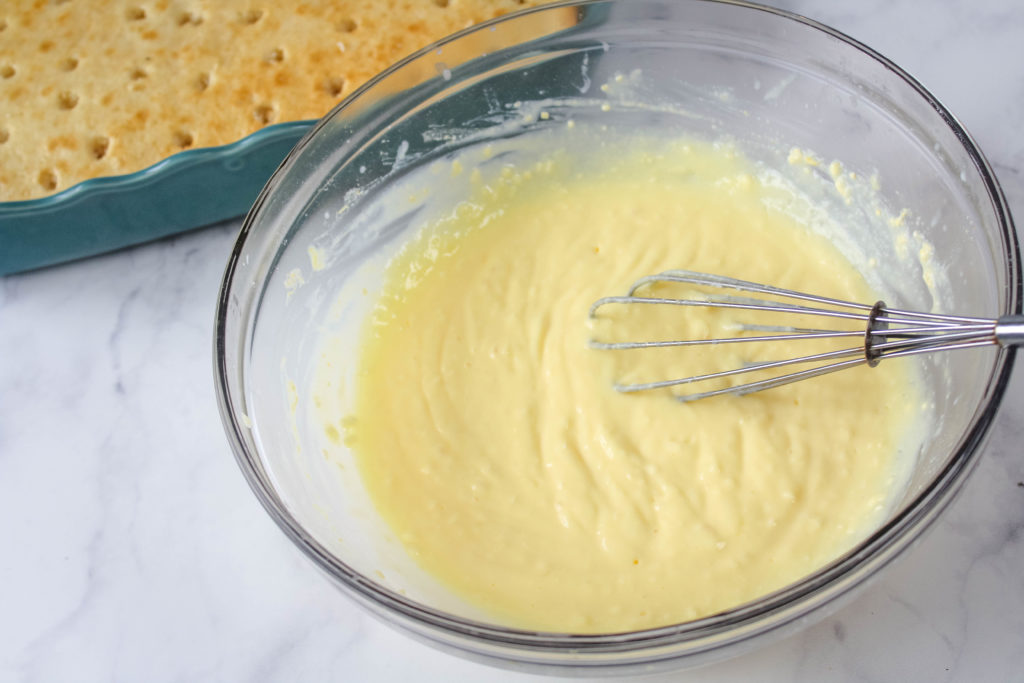 Before the pudding firms up too much pour the pudding over the cake making sure the holes are filling with pudding. 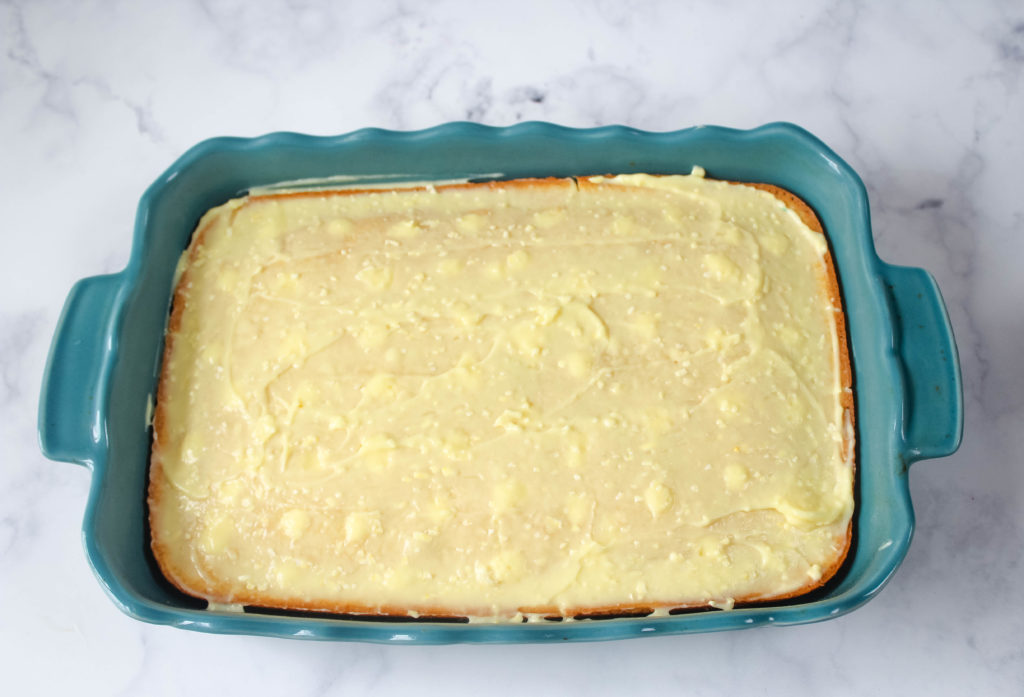 In a medium mixing bowl whisk together the packet of Dream Whip , milk and coconut extracts , beat until soft peaks form. 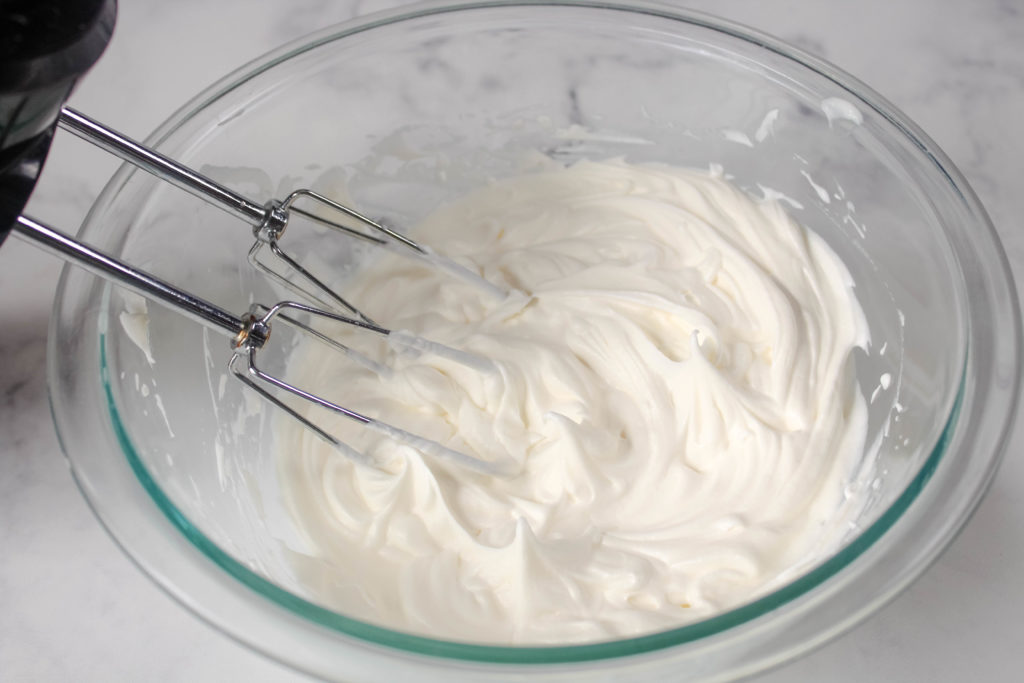 Carefully spread the whipped topping over the cake and then top with flaked coconut. 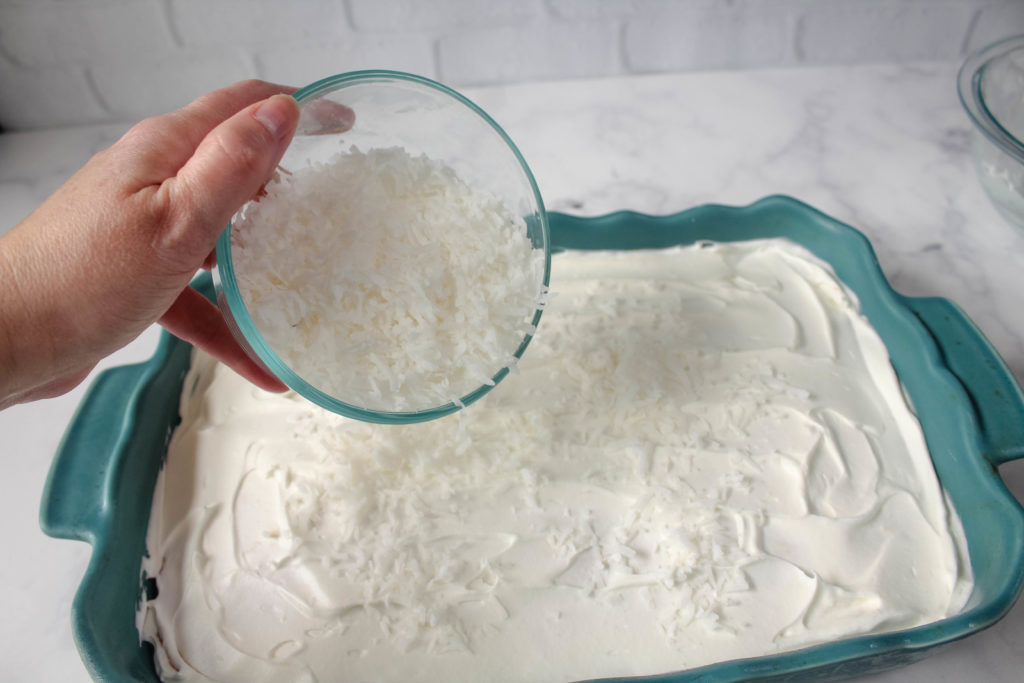 Cover and chill for at least an hour before serving. This cake should be stored in the fridge and keeps for 3-4 days. 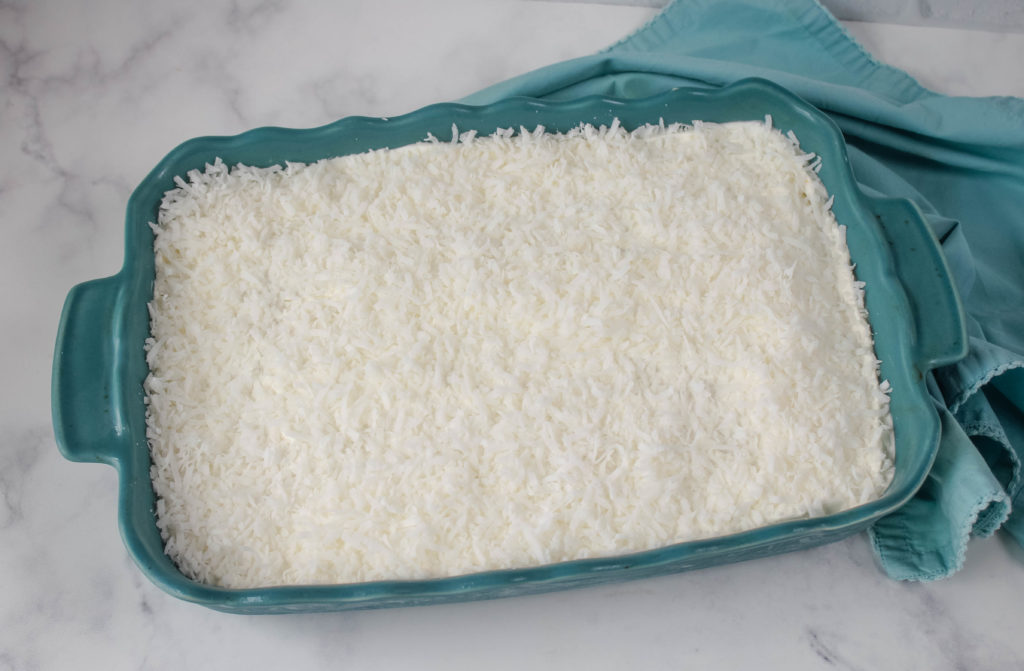 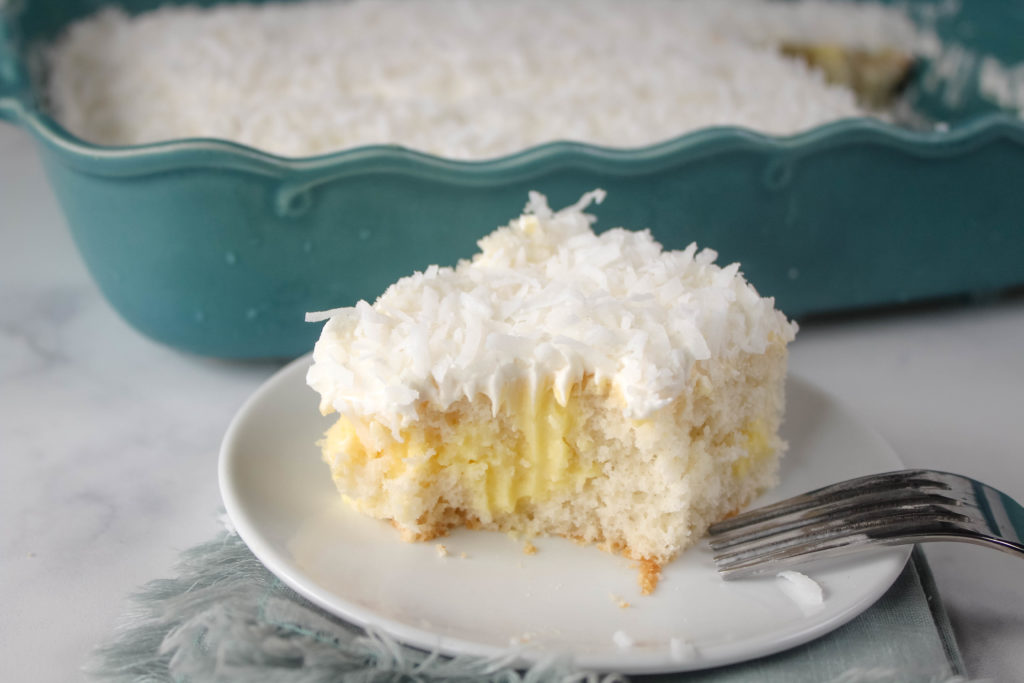 Sometimes the coconut pudding is hard to find , not all stores carry it. It can either be ordered on Amazon or add a teaspoon of coconut extracts to vanilla pudding If you want to cut corners or you can't find dream whip an 8 oz  Whipped Topping can be used in its place, but the coconut flavored dream whip is so much better
Tried this recipe?Let us know how it was!

This cake just looks like a fluffy dream. I love that you’ve infused it with so much coconut. A great simple recipe, sure to impress!

Thanks Bernice !! It is delicious !

I am a coconut lover. This is a great cake for dessert. I would also add it to the brunch menu.

A perfect dessert for all the coconut lovers! The best thing is that this is made with only a few ingredients, yet turns out so delicious!

Such a good and tasty dessert to prepare for my family this weekend. I love it, yum!

Thanks Amy , so glad you enjoyed it.

I love simple and delicious desserts like this one! Plus, it has all my favorite flavors!

Thanks Veronika .. coconut is one of my favs as well.

I love everything with coconut! This cakes seems so yummy. I love that it uses only a few ingredients

Coconut fan number one here and I can say this coconut poke cake looks amazing @I have this recipe saved for our weekly Sunday baking.

I hope you enjoy it Kate!

Debbie, this cake has my mouth watering. It says moist, coconutty, creamy all in one bite. How brilliant to have those holes in the cake so the pudding just pools. Every bite has an incredible creamy spoonful in it. Truly scrumptious and delectable!😋😛❤👍

This is a fantastic Cake .. thank you so much.

Ooh I love anything coconut cake! This cake has the best flavors and texture. Yummy!

I am so glad you enjoyed it.

Poke cake always wins! I am in love with this coconut poke cake, such amazing flavors and texture in the cake! Looks so perfect!

Thank you so much!

Hi Bitsy it’s a 9×13 pan It depends on how you cut it . I usually do 9 or a little smaller and do 12. I usually cut twice length wise and then either 2 or 3 cuts the opposite direction.